As of September 2019, Geomastery is no longer being updated or maintained. Thank you to everyone who played and gave us feedback! It was great fun to work on.

The code will remain available on GitHub, and is under an AGPL license. That means anyone is free to update, modify, or extend it, as long as you credit my original work. (I would love to hear about it if anyone does this!).

Never used Forge or mods before? Here is a step-by-step guide to get you playing Geomastery.

Geomastery is a Forge mod for Minecraft survival mode which makes the early game harder and slower, while improving on the simulation of real-world ancient technology development.

Geomastery is all about survival mode. If you enjoy unlimited sandbox building, you will play in creative mode. We are making survival mode harder and more involved and our general impulse has been to slow down the rate of technological progress in the game. When you’ve been playing Minecraft for a while, you can survive, make a safe home and be mining diamonds within about twenty minutes. In Geomastery, you'll be lucky if your camp looks like this in your first week. 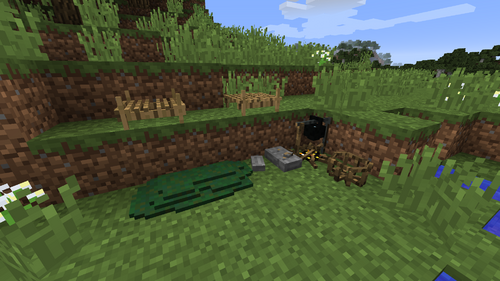 Geomastery changes many different aspects of the game. This list contains links to pages with more detail.

Inventory. Your starting inventory is drastically limited, with far fewer slots and very small stack sizes for most items. But as you develop, you will be able to create equippable items to increase your inventory size again - although wearing them will slow you down! Some items are so heavy they can only be carried in your offhand slot and will also decrease your speed.

Food. You now have three hunger bars; protein, carbs, and fruit/veg. They are filled and drained independently, and each bar can starve or heal you depending on its fullness - although these health effects happen much more slowly than in vanilla. Many food items will also decay over time, so you’ll need a steady supply to keep you going. Sleeping overnight will cost you a chunk of hunger, but will also give you a health boost.

Temperature. This new factor affects you constantly, and if your temperature is too extreme you will take damage. Cold places, high altitudes, and water will all cool you down; while fires, hot biomes, and clothing will keep you warm. A GUI icon next to your hotbar will let you know your approximate temperature.

Technology. There are many different types of crafting and furnace devices based on realistic early technology development. You will need to use the right device for the right purpose, because recipes aren’t available everywhere. Some crafting equipment is vulnerable to weathering, and will eventually be destroyed if you leave it exposed to the elements. There are also various new tools you can craft for specific purposes.

Farming. Many new types of crops can be found, in biomes dependent on their growing conditions. Some only grow in water, some create tall vines which stay when the crop is harvested, and you can also find new trees whose leaves drip with fruit. Farming actions are also slower and harder; tilling earth requires you to break the dirt block with a hoe, and crop blocks break slowly (but quicker with a sickle!). Harvesting food from an animal is also not so easy; a killed animal now drops a heavy carcass which must be broken with a hunting knife to obtain its items.

Building. Most vanilla blocks cannot be placed in the ways you’re used to, and some are affected by gravity. There are many new blocks you can craft and use for building, although these are still subject to restrictions; you’ll need to consider the weight of the materials you’re using, and building out over air requires special consideration.

Combat. The materials used for armour and weapons have changed to fit in with other technology development. There is also a new weapon: the spear. This does moderate melee damage, but can also be thrown as a powerful but short-range reusable projectile.

No longer with us. In Geomastery, a number of items and functions familiar to Vanilla players no longer exist.

We have plans to develop Geomastery much further. Our highest priorities at the moment are:

So far, we have not made intentional efforts to be compatible with any gameplay mods. We've thought of Geomastery more like a modpack all of its own. It changes many fundamental aspects of the game (and has plans to change many more!), so it might be hard or impossible to make compatible with other major game-changing mods, and it's not a priority for us at the moment. That said, if you do find it compatible with other mods and/or want to include it in a modpack, feel free as long as you credit us properly!

This mod has been created by a two-person team. Both of us love Minecraft and games (both digital and otherwise) in general. While we appreciate Minecraft, we felt that we had ‘played it out’ unless things were changed up a bit. We began by looking at what things we loved and wouldn’t change for the world, and what things could be better. One of us is a zealous abstractor (the one who does the magic coding stuff), the other is a die-hard simulator (the one who gets fussy about what is realistic). Getting the balance between these has made for some salty exchanges, some heated arguments, and quite a bit of laughing.

Retrieved from "https://geomastery.miraheze.org/w/index.php?title=Main_Page&oldid=858"
Cookies help us deliver our services. By using our services, you agree to our use of cookies.