From Geomastery
Jump to navigation Jump to search

Geomastery features a number of new aspects relating to building. If you are clicking to place a building element, such as a wall, and nothing happens, consider the list of significant restrictions below. 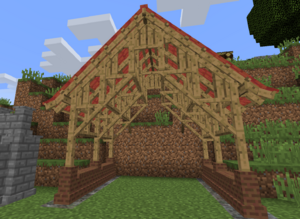 In general, you cannot place any block in the same form you dug it up. When you break a dirt block, it drops a ‘loose dirt’ item but you may not be able to re-place it the same spot. This is true for sand, clay, and gravel, which all drop a ‘loose’ item. Stone also drops a loose item but this is called rubble and has other origins and uses.

Loose items can only be used in building by ‘heaping’. This means that they cannot be placed unless on top of a block which is surrounded on all four sides.

There are several types of wall. All of them behave adaptively – that is, their appearance can change depending on what other walls, if any, are adjacent.

While not exactly walls, frames and fences share the same properties so are considered the same category.

Most building elements fall into one of three categories: light, medium and heavy. In general, a block may only be placed when directly on top of a block of the same, or heavier, weight. This means most building blocks can only be built in vertical stacks. When you need to span a gap (e.g. over a room), you need to use either beams or vaults.

Rough stone, mud brick, stone and brick walls can all be built in two different thicknesses. When you place a wall for the first time, a single (thin) wall appears. If you right-click with another wall item on the side of this block, the wall is ‘thickened’ to a double wall. The walls of a house, for example, may be made of any combination of single and double blocks. When you break a double block, a wall item is dropped and the wall is ‘thinned’ to a single wall.

Rough stone walls and mud brick walls are limited to a height of two blocks, and such a wall can only be formed from a single on top of a double.

A beam is a special multi-block item made for spanning gaps between walls. A short beam spans up to 4 blocks and a long beam up to 8 blocks. To place a beam, click on the side of the block you wish to span from. You must have a block ready at the other end of the span, otherwise the beam will not be placed.

Normal walls cannot be attached to the side of other blocks without being supported from directly underneath. The only way to extend walls out over air is to use vaults, which are placed on the side of wall blocks. Vaults visually adapt to the other blocks around them, and also have single and double forms like other walls.

These are special blocks which need to be supported from underneath or connected to supported roof blocks. Flat roofs cannot be walked on; trying to walk on it will cause it to fall down. A flat roof gives partial weathering protection to crafting devices which suffer from damp.

These are special adaptive blocks which need to supported from underneath, for example, by stone vaults, frames or beams. A roof gives complete weathering protection to crafting devices which suffer from damp.